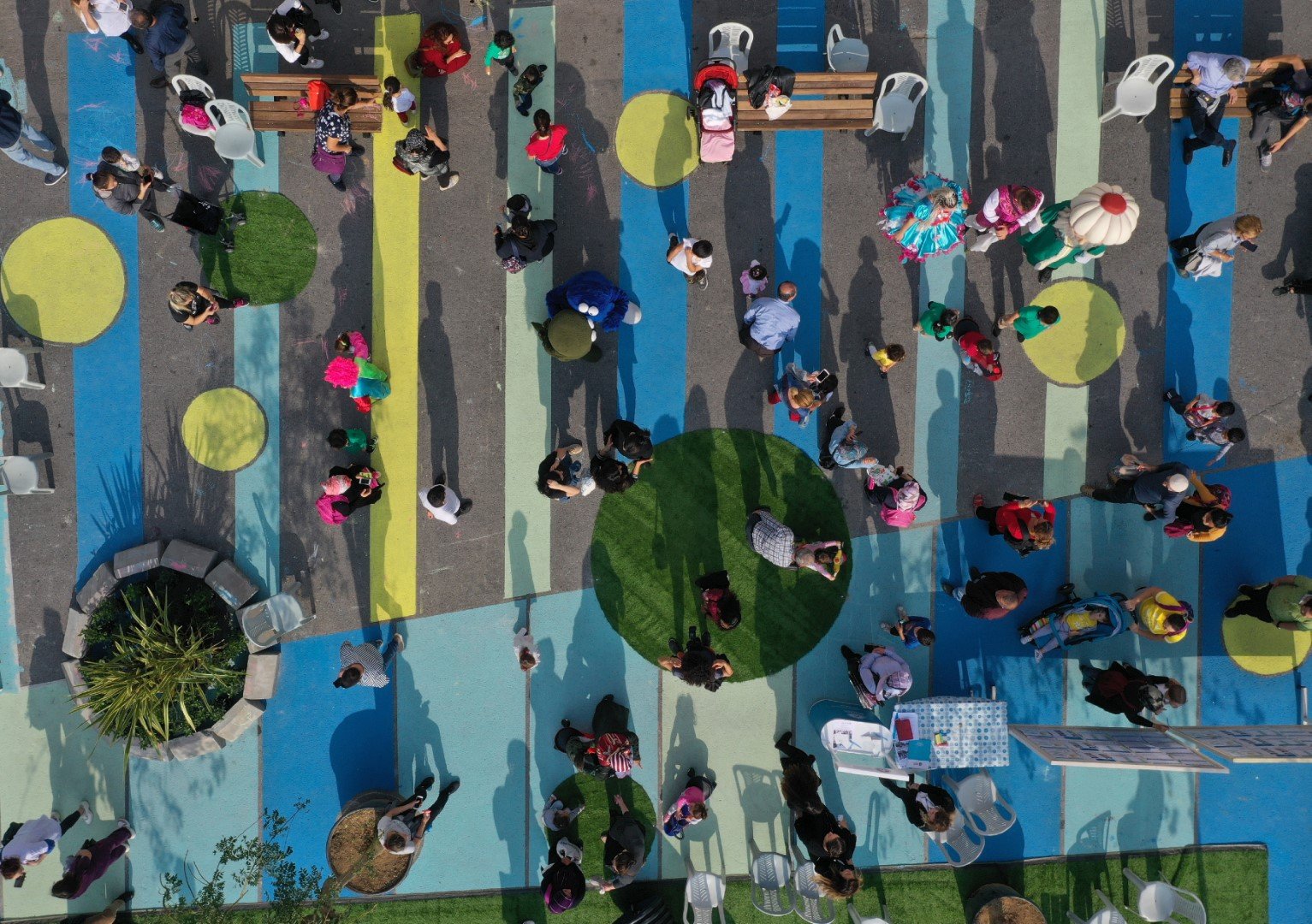 Designed by Superpool, Zümrütevler Square Interim Implementation is increasing pedestrian safety by shifting our angle to see the city from an elevation of a 3 year old. Yalı Square and bike path implementations aim to remove irregular parking to create a neighborhood square in front of a primary school facility.
Photo: Emre Dörter

Maltepe95 is a collaboration between Superpool and Maltepe Municipality to create neighborhood squares with iterative design interventions and transform underutilized urban spaces. Starting in 2018, the collaboration has been supported through the Urban95 program initiated by the Bernard van Leer Foundation and technical assistance has been provided by Global Designing Cities Initiative. The Urban95 program and its local adaptations across the globe such as Maltepe95 ask a simple question to decision makers, planners and everyone involved in making of cities: ‘What would you do differently if you could see the city from an elevation of 95 centimeters – the average height of a healthy 3-year-old?’

Maltepe95 to date transformed two underutilized traffic junctions to public squares in Zümrütevler (2019-2020) and Yalı Neighborhoods (2022). Both of the interventions have utilized an interactive design and implementation methodology where pop-up and interim applications precede the capital investment, creating an open process of participation and decision making. The iterative process allows for detailed observations, data collection and community participation and ensures that the final implementation meets the needs of and is celebrated by the neighborhood.

Designed by Superpool, Zümrütevler Square Interim Implementation is increasing pedestrian safety by shifting our angle to see the city from an elevation of a 3 year old.

The Bernard van Leer Foundation supported the interim implementation realised in October 2019 within the scope of their Urban95 program focused on the city and early childhood. So as Superpool, we too, within the framework of this program, wanted to learn and implement together, as part of a broad network of partners, how streets could be improved in a manner that takes young children and their caregivers into consideration.

With a population of 71.500 people, Zümrütevler is one of the two most intensely-populated and disadvantaged neighbourhoods of Maltepe district. More than 30% of its population comprises children and young people in the 0-18 age group, while babies in the 0-4 age group make up 8%. There is a lack of open spaces and parks because of dense housing development. Therefore, the decision was taken to carry out the first interim pedestrian-priority street implementations planned for Maltepe in the Zümrütevler neighbourhood.

In the interim, aimed to increase pedestrian safety, roads were painted to encourage traffic calming; sitting areas and low-cost play elements were designed where children and their caregivers could spend their time comfortably.

Zümrütevler Square, whose permanent implementation was completed in August 2020, has become a public space where the neighbourhood can spend time and children can play.

At Zümrütevler Square, 1075 square meters of vehicle road was converted into pedestrian space, and a square of 550 square meters was formed.

SPENDING TIME
We observed a 72% post-implementation increase in people spending time at the square. According to weekday afternoon observations, the number of babies and small children increased three-and-a-half fold, while the number of children in the 5-12 age group increased twofold. According to the same observations, 61% of children played with their friends, 21% played alone, and 18% played with their caregivers. The number of older adults spending time in the square increased ten-fold.

We wish that public officials and administrators, educational institutions, designers and the inhabitants of this beautiful city begin to work together and find excitement in producing more safe, pedestrian priority streets and lively public spaces!

Yalı Square and bike path implementations are planned with a collaboration between Superpool, Maltepe Municipality and Istanbul Metropolitan Municipality supported by the Bernard van Leer Foundation and Global Designing Cities Initiative. The interventions aim to remove irregular parking to create a neighborhood square in front of a primary school facility, transform Onurlu Street as a pedestrian priority street and create a bike path that connects the metro station to the public facilities along the coast.

The project is being implemented in phases through iterative design interventions. First pop-up trial in September 2021 tested the potential of Onurlu Street as a pedestrian priority street. Based on the positive feedback received from the pop-up implementation, a large-scale 6-month interim implementation was realized in April 2022. Yalı Square and Onurlu Street implementations are currently being evaluated through observations, data collections and community feedback and the capital investment is being planned before the end of the year.

The interim implementation of the planned bike path connecting the metro station to the coastal bike paths and parks is currently on hold due to the adverse effects of other roadworks in the district. Necessary permits are acquired and the intervention is set to move forward waiting for a moment of favorable public opinion.

Yalı Neighborhood is one of the many neighborhoods lying along the Marmara Sea Coast connected by the Marmaray metro line. The residential parts of many of these neighborhoods and metro stops are cut-off from easy access to the parks along the coast by a large highway. Yalı neighborhood was chosen as a pilot intervention to improve pedestrian and bike accessibility between coastal parks and public transportation and residential zones north of the highway.

The chosen site also offered quick and important wins: the creation of the public square by removing irregular parking and the provision of much needed pedestrian safe zones in front of the primary school, as well as the redesigning of Onurlu Street as the first pedestrian priority street in Istanbul.